From NYC and SFO to Cairo: Blackstone Bistro

When it’s Saturday around 13:00 (the time of the day/week that is equivalent to Sunday at 11:00 in Europe and North America) and you’re craving something substantial for brunch or lunch then the only place to head is the charming American-style Blackstone Bistro.

With locations (where else?) on the Manhattan-ish island of Zamalek and the suburban playground of Maadi, Blackstone has done a solid job of capturing the atmosphere of bistro style restaurants in New York and San Francisco. Their focus is on serving fresh, simple and homemade food that’s North American in orientation and packs a heavy punch: we’re talking eggs sunny side up, hash browns, beef bacon, cinnamon toast, pancakes, waffles and even an egg-white omelet with a side of grilled vegetables. 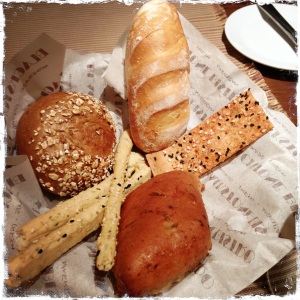 Their menu goes beyond breakfast items to include salads, soups, pastas, sandwiches and a variety of grilled meat and seafood options (succulent salmon anyone?). In addition, the restaurant has a stone oven in the back where it bakes Blackstone pizzas, breads and pastries to perfection.

When I popped in I was really in the mood for the egg white omelette, but unfortunately they stop serving breakfast at 13:00. It was 13:45 by the time my friend and I seated ourselves so I went through the menu trawling for anything else I could find that was light, savoury and would carry me through until dinner.

I went at lunch and I really wanted the egg white omelette. Instead I ended up with grilled veggies and a side of rice…which wasn’t all that bad.

Because I wasn’t in the mood for meat or fish I wound up going with some grilled veggies and a side of rice. I know it doesn’t sound all that amazing, but it wound up being quite good and just what I needed to quell my grumbling stomach. What was even better was the atmosphere as you really feel like you’re in an American bistro thanks to contemporary tunes playing over the sound system and a decor featuring brick inlay, wood floor paneling, beige walls and gritty, textured photographs.

It’s certainly good value for money and a nice place to while away a wintry Cairo afternoon.

← A Wonderland of Bagels at APDM (Au Pays des Merveilles)
Don’t Judge a Book By Its Cover: Fast Food at Al Jazeera →