In the Heart of the Republic There’s Cavallini

I’m the first to admit: I don’t get off the island very much. Zamalek has a way of making life very comfortable and there’s often no need for me to cross any of the six bridges unless I have something work related to attend to or friends to visit in another part of town. Last week I agreed to venture out of my comfort zone to one of the most independent and liberal parts of Egypt’s capital (a self proclaimed republic if you will): Heliopolis. Located in Cairo’s northwest, the Belgian-established district is home to beautiful old villas and apartments, charming tram lines still in use, the haunted Baron Empain Palace, headquarters of the army and the Presidential Palace.

Well of course it’s going to be one of the most posh and well looked after places in town.

A friend’s birthday was the reason for meeting up at Sun City Mall, an expansive shopping mecca that opened its doors earlier this year and is located a stone’s throw away from Cairo International Airport. The mall is chock full of supermarkets, cinemas and clothing stores, and it also has several well-to-do restaurants/lounges perched on the 5th floor. 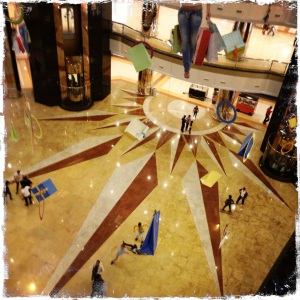 Gazing down from the top floor. I actually preferred Sun City to City Stars. Why? I’ll blog about it later this week.

Cavallini was the place the birthday girl chose to dine and it’s one of three restaurants in Sun City managed by the same owner. One can access the resto-lounge via the mall entrance or parking lot lift in the back. Regardless of where you enter, what you walk into is a place with a modish and swish interior, low lighting, today’s Top 40 thumping away on the sound system and a few large television screens set to – what else? – MTV.

The back of the restaurant opens up into a delightful terrace that allows for party goers to gaze at the stars while they sip their cocktails and puff away on a shisha. I immediately thought it was a great locale: the air seemed cleaner this side of town and the chilly fall/winter breeze was welcoming. It felt great to be sitting outside in a sweater, blazer and light scarf. This time of the year is really the best in Egypt.

Flipping through the menu takes a good five minutes as it is quite extensive. Despite the alluring photos and descriptions of dishes I have to admit: I wasn’t convinced I’d eat something worth recommending. I’m always skeptical in these kind of places (especially in Cairo), but this time around I was pleasantly surprised.

Entering the bar and moving towards the terrace.

First of all the service at Cavallini makes it a rave-worthy place. It was fantastic. Attentive servers moved back and forth between our tables the entire evening and catered to the whims of 20 people with different desires (booze and shisha) and tastes (I’m looking in the mirror at this Intolerant).

Second: I was able to relay my allergies/intolerances to the server without having to repeat myself, mime with strange hand gestures or send my plate back because there was – in fact – a whole bunch of butter or cream sauce smothered all over my dish.

Third: the food took a while coming out, but it was worth the wait because it was pretty darn good. Within our group there were orders of steak, salads, club sandwiches, vegetarian platters, battered shrimp, cold mezze and grilled sea bass.

Rice garnished with a bit of dill.

I was the owner of the sea bass and my fish came with a side of vegetables and rice, both of which were enjoyable. The fish, while tasty, was a bit salty, which didn’t bother me too much, but it’s something I’m going to keep in the back of my mind for the next place I visit in Cairo (these days it seems that over-salting items is the norm). On the whole I was pleased with the food and the atmosphere, and I wasn’t the only one. Glancing around the lounge over the course of the evening all I saw were the beaming faces of people having fun, myself included. I was in great company and I was also secretly pleased to have had an MSG/dairy and gluten-free meal that didn’t leave me feeling bloated or nauseous by the end of it.

Presentation: check. Taste: not too bad either.

Additionally, it was great to be at a place where you can bring your own drink (you have to pay a corkage fee), which makes sense for wine and premium alcohol. Well, unless you’d like to try one of Cavallini’s saucily named cocktails. I mean having a Black Russian followed by a Juicy Pussy and then some Sex on the Beach…what could be better? 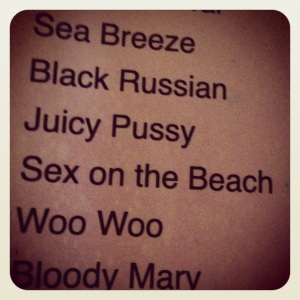 For the cocktail names alone, I give Cavallini a thumbs up.

It was totally worth getting off the island for.