Ah Cairo. Revolutionary, tumultuous, schizophrenic Cairo. While I’ve warmed to several aspects of Egypt’s most populous city, other elements still drive me mad. The quality of food is one of the major things I battle with and while I have had some truly amazing meals at the homes of friends and colleagues, dining out is a constant challenge due to a myriad of factors, such as the following:

1) An inability to be taken seriously in some establishments when it comes to wanting food without lactose/gluten. Also, if one ingredient is removed (e.g. butter) it is sometimes replaced with something equally undesirable (a half cup of vegetable oil, croutons…why??).

2) Egyptian food is at once similar and dis-similar to other food in the region. While there are common staples like rice, falafel (tameyya), couscous and babaganough, the typical food here tends to be centered around heavy hitting carbs like rice, bread, pasta and beans, along with soft white cheeses, root vegetables, green legumes and a host of fried goods. While several traditional dishes: grape leaves, falafel, ful and mulukhiya are quite enjoyable, I find others weigh me down post-meal due to the amount of oil and carbs ingested in one sitting (anyone who knows koshary – a bowl full of rice, pasta, lentils and chickpeas, widely known as Egypt’s national dish – knows what I’m talking about).

3) The difficulty in securing daily access to quality organic/biological produce and goods. Since there isn’t solid data available on the extent to which pesticides and hormones are used by farmers in Egypt, I would enjoy having the option to buy organic on a regular basis.

4) The inconsistency of restaurants in providing good food and service. If I had 5 LE for every time I went to a new establishment and had a nice experience and returned 4-8 weeks later to have a crappy one, I’d be well on my way to amassing an enviable savings account.

Indeed, if you’re looking for a memorable (in the positive sense) dining experience in Cairo, it can be painfully frustrating sometimes.

Enter Cairo Kitchen, where traditional balady street food meets a retro pop-art interior for an overall experience that is easy on the eye, light on the wallet and so utterly satisfying for the stomach. Located in Zamalek off of the 26th of July corridor on Aziz Osman Street the place jumps out from its surroundings as you approach from outside. Entering through the doors of Cairo Kitchen feels like stepping into another city, one that’s less loud and obnoxious and is quirky and mellowed out instead. The bright kitschy colours, metallic accents and writing on the wall make the place instantly appealing.

The concept at Cairo Kitchen is one part self-service – with a drink-station, dessert bar (rice pudding or creme caramel for any Un-Intolerants out there?) and cup of cutlery on each table – and one part buffet style. Dishes are made with locally sourced food and organic options are integrated where possible. The food counter is located in the back and is where a version of the infamous koshary comes to life, yet this one is made with a nutritional twist (brown rice substitutes, less oil used). Aside from the rice/pasta/bean mix there’s a host of other traditional warm dishes like lentil soup, shrimp in tomato sauce or fereek with chicken liver. Just next to the warm options are a plethora of salads and legumes – multiple bean concoctions (white beans, fava beans, black eyed peas, etc.), tossed tomato and cucumber, mixed greens, potato and onion, couscous salad – along with various dips (carrot with tehina and eggplant) and heaping baskets of balady bread that can be used to snatch up food morsels left behind on your plate. 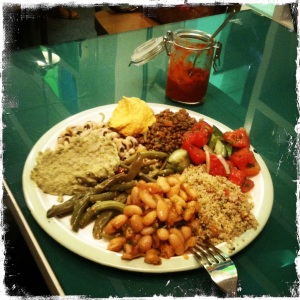 The ‘before’ shot: greens all around.

I frequent this joint every so often after yoga and I have to say the quality of the food has only gotten better since the first time I tried it 4 months ago. For the most part I stick to the salad bar since I’m not a big fan of the whole pasta, rice and legumes concoction, though I’m told it’s really good by expats and resident Egyptians alike. Every so often I indulge in the lentil soup with a pinch of fried onion on top, which is thoroughly enjoyable: smooth, slightly heavy and a bit spicy. The veg options are nice and always look and taste fresh. My favourites among the cold buffet include the lentils and any of the bean mixes, though the fava beans have a fantastic flavour that’s so savory I could easily eat a bowl of them on their own.

In all, the food, along with the outdoor patio, along with the competent staff that do their best to answer questions and help choose items to heap onto your plate, along with a ridiculously low price tag (case in point: 180LE bill for 6 people = roughly 30 USD. Where else does that happen?) makes Cairo Kitchen one of my favourite “fast food” places on the island of Zamalek.

The only critique I can muster is sometimes the mixed veggies can be on the oily side and the beans too salty. As for allergens it’s pretty straightforward: gluten Intolerants should steer clear of the koshary, fereek, bread and anything with couscous. There’s not much to deter those with an aversion to lactose save the desserts and the obvious cheese-laden salads. I’ve asked time and again if the carrot (the bright orange blob on the bottom of the above plate) and other dips are lactose-free and have been told they are. However, to be frank: I’m not entirely sure since sometimes there’s a creamy feel and tangy taste (in the carrot dip especially) that makes me wonder if there’s a tinge of yogurt or soft cheese in there, which could be problematic for someone with a severe intolerance. I do get a bit of bloating after eating at Cairo Kitchen sometimes, though it’s hard to know if it’s the dips or the stupid amount of beans I insist having piled onto my plate. Hmmmm, I think my next task will be to pop in earlier in the day so I can root out the chef and solve this mystery once and for all.

Not a bad excuse to rock up to Cairo Kitchen for a quick bite don’t you think?

The ‘after’ shot: gives credence to the saying “licking the platter clean.”